Cleft chestnut fencing can be perfect where a more substantial and permenent type of traditional fence is required. Being made of highly durable sweet chestnut once installed it needs no further treatments or preservative. Over time it will naturally darken until it becomes a beautiful silvery grey. And because it's normally installed without the use of postcrete or concrete it's very environmentally friendly.

I produce 2 particular forms of cleft chestnut fencing – post and rail and paling fencing (also sometimes referred to as park or deer fence). Paling fencing being essentially a cleft post and rail fence with pales (split pickets) attached in a variety of patterns. 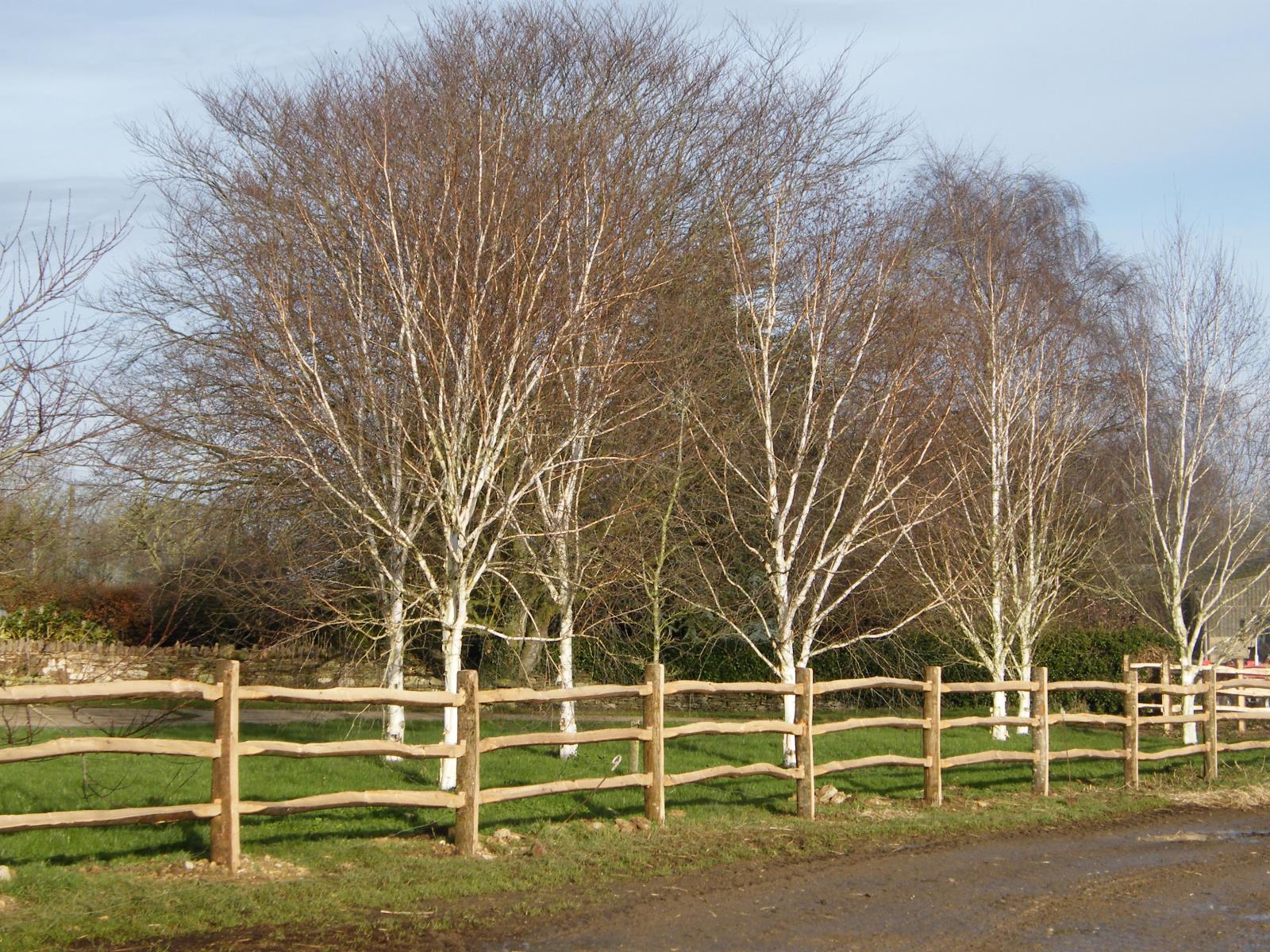 Cleft post and rail shouldn't be confused with the straight sawn post and rail fencing made of treated softwood, that one often sees around horse paddocks. This form of fencing is made from machine cut rails nailed to the machine cut posts.

Cleft post and rail consists of cleft (split) posts that then have cleft rails fitted into them by means of a mortise and tenon joint. (Essentially the ends of the rails are shaped in such a way as to fit into holes cut into the post.)

Different craftsmen make their posts in different ways. I choose to split 8–10 inch diameter coppiced sweet chestnut poles in half. These are then roughly squared up (with a chainsaw) on 2 sides. Some makers leave the posts as half rounds but I prefer to trim the sides off as they make for a more refined slightly lighter look that's more appropriate for most peoples needs.

Rails consist of (usually) quarter round chestnut poles with the bark left on. For straight forward post and rail this bark side faces down so the water is shed off the upward facing triangular cross section.

There are different ways of fitting the rails into the mortises, depending on region and the producers preferences. I prefer to shape the ends so that the end of one rail sits over the top of the next. This creates a stronger join and lessens the chance of splitting the post down the middle, but exerting any pressure up and down rather than sideways on the joint. It does however take slightly longer to install and does require more basic carpentry skills and tools should you choose to install it yourself.

The number of rails you choose to have very much depends on the purpose of the fence.

What is paling or park fencing 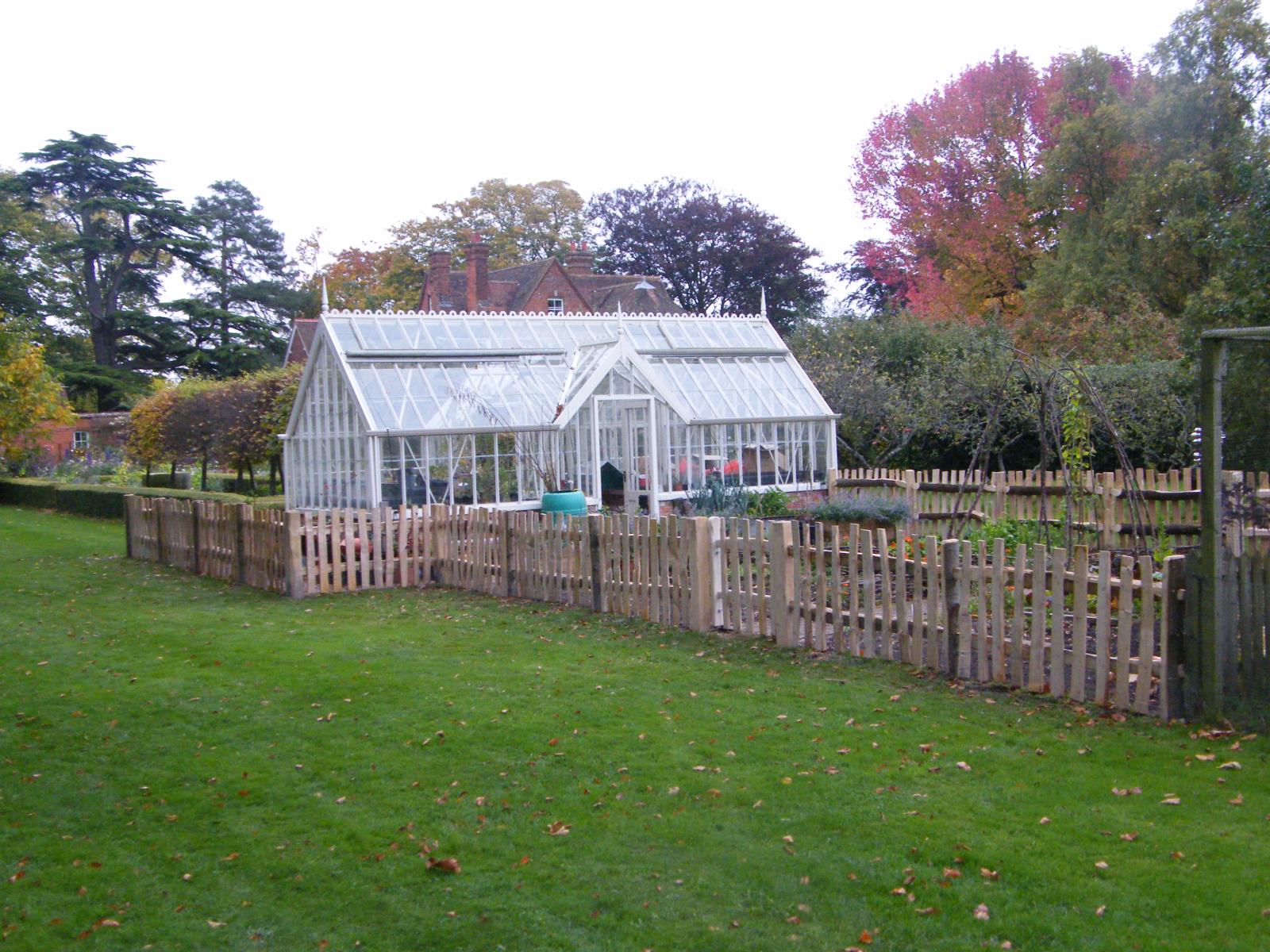 Depending on it's height and spacing, paling fencing can offer a very substantial barrier that is very effective for either keeping animals such as pet dogs in or or keeping animals such as deer out. Traditionally it was used round deer parks, hence its alternative name. I'm led to believe that for some reason the deer don't like to try and jump over the irregular tops, presumably through fear of the risk of injuring their soft underbellies.

As briefly mentioned above, the paling fencing that I produce combines the robust nature of the traditional post and rail fence with additional pales or pickets fixed to them. These pales are made by cleaving (splitting) 8–10 inch diameter sweet chestnut poles into 16 pieces with triangular cross sections. Depending on the client's preference these are then either left as they are, trimmed down to make them more regular or shaped to a rounded point. These are then nailed to the rails in a variety of patterns.

This form of fencing can utilise 2 or 3 rails. 2 rails is sufficient where a fairly uniform top line is required. 3 rail offers more options with pale height and can allow for more flexibility with regard to creating repeated patterns within the pales.

If required, (and depending on the distance from my workshop,) I am happy to offer a full installation service. In fact, the majority of this fencing  I install as well. However, if you're willing to have a go at installing them yourselves, then I am happy to give you advice. Please bear in mind though that both styles do require a certain amount of basic woodworking knowledge and some tools.